First Flying Car by the time of 2020 Tokyo Olympics!

First Flying Car by the time of 2020 Tokyo Olympics!: You might have already heard about the team of Japanese engineers that are working on aflying car, well now they revealed their goal to launch it in time for the 2020 Tokyo Olympics. The super vehicle called Skydrive, has three wheels a motor and four rotors, that will enable it to land vertically from public roads without the need of a runway. 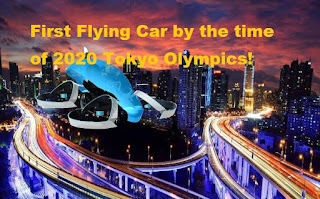 The vehicle will only measure 9.5 feet by 4.3 feet, and will be the world's smallest driving car, with a target top flight of 62 mph, and will travel up to 32 feet above the ground. The team of 20 engineers and designers is headed by Tsubasa Nakamura, 31, from Mikawa in Aiichi prefecture.Their goal of proving a brand new form of personal transport to help avoid disruption caused by Japan's earthquakes, brings us to the idea that the future we've only seen in Hollywood movies is already here.
Автор: Unknown на 01:21